The Unitarian Universalist Church in Meriden was gathered in 1864 as the First Universalist Society of Meriden.  In the mid-19th century the theology of “Universalism” – the notion that a loving God would not damn the children of his creation to an eternity of suffering – was novel, to say the least.

The first Universalist sermons in Meriden were preached by traveling ministers, often at the home of Noah Pomeroy, an early Meriden industrialist who was among the founders of the church.

The first Universalist preachers in Meriden were invited to town by Noah Pomeroy, an early Meriden industrialist.  Pomeroy began his career as a salesman of tin wire and other metals and in his travels throughout the New England area he became introduced to and fascinated by a novel theological idea known as “Universalism”. After settling in Meriden in the early 1820s he began inviting traveling Universalist preachers to speak, often at his home with varying numbers of his friends and business associates in attendance. With the coming of the railroad and the resulting growth of the community the small progressive group grew as well and services became more regular. In the spring of 1853, at a time when Rev. Abraham Norwood was leading services attended by 60 to 80 persons, a committee was formed to investigate the construction of a permanent place of worship. The following year sufficient money had been raised, and in April of 1854 The First Universalist Society of Meriden was established. Rev. James Gallagher was its first called minister. Among the many ministers who have served the congregation over the years, perhaps the most notable is Rev. Dr. James Chapin who was the minister from 1873 to 1885.    Already an accomplished and renowned preacher and educator when he began his ministry here, Dr. Chapin had served as the Pastor of the Universalist Church in Springfield Illinois before taking time off to travel the world and served a professorship at St. Lawrence University before settling in Meriden.  While in Meriden Dr. Chapin was highly involved in civic affairs, was a popular speaker on subjects far outside the realm of religion.  He served on the Board of Education eventually becoming the Superintendent of Schools, a post he continued to hold even after his pastorate ended.   He was also the primary force behind the creation of the first high school in the city.Mr. Noah Pomeroy, Circa 1860For the first few years the congregation met in various halls for periods of time.  In 1860 money was raised for the construction of the first meetinghouse which was enlarged a few years later.  In 1893 work was completed on the large brownstone building across from City Hall which this congregation called home for over 100 years.  In 2000 the congregation sold the building and began work on the current meetinghouse on Paddock Avenue where we have been since 2005. 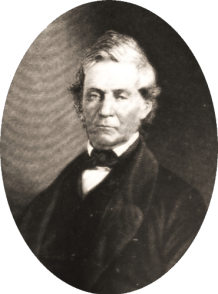